An Extract from ‘Bongwe and the Kingdom’ by Esnat Phiri

When lions were kings of the African jungle and lazed in the shade of the trees, yawning and dozing with bulging stomachs, hyenas laughed as they preyed on their victims, vultures grew fat feeding on carcasses, and birds swarmed the skies and gazed at the beauty of the earth … something changed.

The lions could not find their prey and travelled miles and miles searching for water. Their bulging stomachs had shrunk and bones protruded from their bodies. The hyenas stopped laughing and the vultures grew thin. The birds no longer saw the beauty of the earth and all they saw was dry parched land with bush fires burning everywhere. There was desperation and pain across the great African plains. The drought was now in its third year and the weak and sick animals succumbed to thirst and hunger and died.

So it came to pass that something unheard of happened. The animals in unison decided that in order to survive they had to work together and think of ways of finding the one thing they all needed to survive. Water! Water had become so scarce that the animals spent all their time wandering up and down the lagoons, potholes, rivers and lakes that had now all dried up.

The earth looked like a desert and nothing grew. 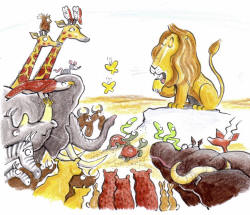 Finally a meeting was convened and all the animals in the Kingdom of Njase sat down for the first time. There were Elephants, Lions, Hyenas, Tortoises, Snakes, Hippos, Deers, Zebras, Wildebeests, Giraffes, Hares, Rabbits, Boars, Warthogs, Eagles, Owls, in fact every mammal, reptile and bird was represented.

“Whom do we choose as the chairman?” boomed the Elephant.

“Well, what about the Lion?” suggested the Hyena.

After all the presentations and deliberations the votes were in favour of the Lion as the chairman.

“Well, I would like to thank all of you for your confidence that you have voted me as your chairman. These past months have been the most difficult in our Kingdom of Njase.”

“I truly hope that we can all work together and seek ways and means of finding water. We have all suffered a lot due to this drought. My grandparents have died as they were too weak to walk for long distances to look for water,” roared the Lion as he chaired the meeting.

“Mine died too,” screamed the Squirrel.

“Mine too,” squeaked the Mouse.

“Ah well, I am sure we have all suffered and now is the time to bring these tragedies to an end,” intervened the chairman. “Anyway, let us think hard and see what we can do. Any contribution is most welcome,” – continued the Lion.

“I have an idea. Why don’t we all pack up and go home. There is nothing we can do here. We are all wasting precious time talking when we could be out there looking for water,” sneered the Baboon who liked to call himself Bongwe.

“That is not the attitude we need here Mr. … hem … hem,” stuttered the Lion.

“Mr. Bongwe is my name,” Bongwe said with a smirk.

“I think Mr. Bongwe is right. We cannot do anything and if the rains do not come soon, then we are all doomed,” laughed Fisi the Hyena.

“We do not need this kind of thinking right now and as you rightly put it, Mr. Fisi, we shall all surely die if we do not think of something,” trumpeted Njovu the Elephant.

The animals argued fiercely. They adjourned the meetings several times in order to cool tempers. After much deliberation over a period of three days, the animals sat down once again and wondered if anything at all could be done as death was truly knocking at the door for all of them.

Suddenly there was a commotion everywhere as a small soft voice from the back shouted:

“An idea, what a load of rubbish. Even the wise old Owl could not figure out what to do and what has a Nfuko got to say that can save us all?” insulted Bongwe.

“Okay Mr. Bongwe, that is enough. Let us hear what Mr. Nfuko has to say,” shouted the Lion as he confirmed his authority as chairman of the animals. “It’s … it’s … like eh … this,” stammered Nfuko.

“Please order, order. I must be obeyed immediately so that Mr. Nfuko can have his say. Everyone has had a chance to speak and now it is his turn. Please go ahead, Mr. Nfuko,” commanded Mkango the Lion.

With much hesitation and trepidation Nfuko outlined his plan. “You see … eh … if we can dig a borehole ourselves that goes deeper than the natural boreholes we may be able to find water underground,” continued Nfuko.

“So how do we know that there is water underground?” hissed Njoka the Snake. 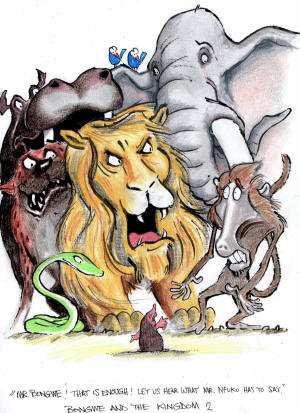 “There must be some water down there, as I am sure some of the rainwater does go down and gets trapped in the rocks and forms pools underground,” explained Nfuko.

….To read more: please visit our Online Shop to purchase this or any of the Bongwe books.

50% of net royalties from sales will go to ‘CONTESA‘ (Reg. Charity) providing shelter, food and education for orphans in Zambia.